I left my home in Georgia for a lot of reasons. Mostly I went out into the world to find myself and become some kind of legitimate writer. As an open-minded thinker, and godless son of a bitch, I have my beefs with my hometown/state/region; its politics, its religion, etc. I also have my loves there. Friends, family, old sweethearts, music. The South is plenty rich in culture. As proof I point you to The Bitter Southerner, or my favorite literary mag, The Oxford American (Its music issue in the winter is my Christmas!). After six years as an ex-southerner, I’m seeing a growth here in Brooklyn. It started with a friend who moved here from Tennessee. She invited me to see her southern country band perform. Suddenly, I’m aware of this grand exodus from the South, and their burgeoning community in New York City of all places. What are these country folk bringing to my urban digs? What am I for that matter?

I’ve been giving a lot of thought to what my mission statement should be. What would be my hypothesis of this trek out onto the streets of Ol’ New York, and into these unknown southern territories? I guess I don’t have one. I don’t know country. I mean, I know Cash, I know Merle, and Loretta and Patsy, but I don’t know country at large. I’m no reviewer, no critic. I just like when they holler, and I like when they stomp. I’m from the south, and all my days there I mostly felt alien to it, and I never had no Jesus to speak of, so I don’t know with what frame of reference I make this journey. I guess I’m just going to see what I can see. I guess I’m just a bear coming over the mountain. 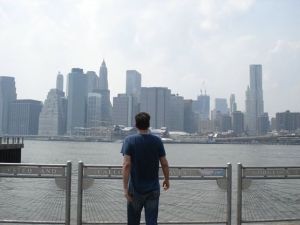