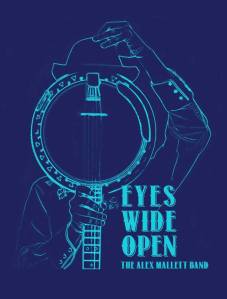 This man, this Alex Mallett man, is amazing at the instrument that produces my favorite sound, the banjo! I’ve seen him get whole Brooklyn crowds jumping up down to his pickin’ and a strummin’. He is a constant in the BK Country and Roots Family music communities, often playing with every other band in a line-up as well as his own sets. The man, the Alex Mallett man, is tireless. When I first started seeking out the be all of BK Country his name was dropped by everyone I spoke to as the man I need to see play. I have since seen his shows and they are stellar. Help this man, this Alex Mallett man and his band, The Alex Mallett Band. The deets are these. You can even have a listen to their first album right here! Hell, you can even check out a video below! I know I’ve just been clever (very) and cute (always), but, really, I’ve seen this band a few times, and I’ve heard songs from Eyes Wide Open. It deserves to be made and put out into the world.

This video was recorded at Jalopy, and is where, by all accounts, the hub of BK Country is said to be. Just FYI.