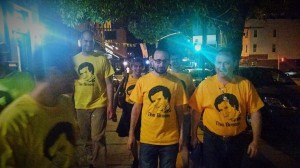 A gang of Perfect Strangers

The other night I was at J’eatjets’s bar. I was minding my own. Then I spied a drunken band of merry-makers clad in the same t-shirt that bore the image of either Balki Bartokomous’s cousin Larry or Alex Mallett. I believe I saw Gypsy George in the shuffling gang, and know that I saw Justin Kilburn (of That Moon) because he stopped and saluted me. It turns out they were Alex Mallet’s bachelor party. I thought to myself, huh, I guess things go on in these musicians’ lives without me. Imagine that. It got me thinking that since The Trisha Chronicle I’ve not been commenting on BK Country as diligently as I should.

Firstly, let us congratulate Alex and Sammie on their upcoming wedding! 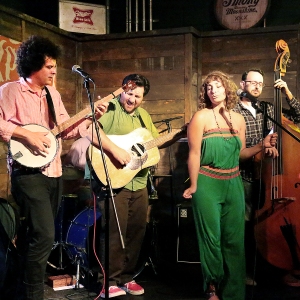 Alex & Sammie sittin’ in a tree, hopefully not interrupted by Chris Murphy 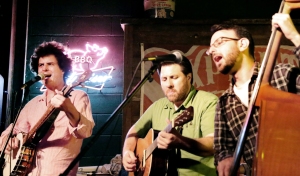 A few weeks back, myself and intrepid photographer, Andreea, attended the Alex Mallett Band show at Hometown BBQ that was put on to support his crowdfunding effort for his new CD “Eyes Wide Open.” I’m happy to report he made his goal, and the album will be let out into the world. Alex is a swell guy, and he and his band are excellent musicians. This is a fine and fair thing that has come to be in a world notorious for how un-fine and unfair it can be. 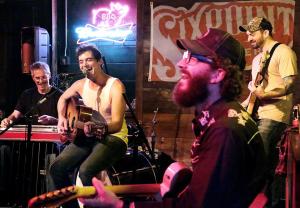 That night, TRS met Hometown’s GM, Mitch Rosen, and on his advice the intrepid photographer and I returned the next night for JD Patch. JD’s show can only be described as a big ol’ time! I heard the old honkytonk sound I missed from younger days when at the juke joint of ill-repute in my hometown, a place called Mudcats that no longer exists except in story. JD’s music is quite a bit more ribald than these other musicians and bands that I have followed on this blog. He sings about drinkin’, weed smokin’, and skirt chasin’. I think I heard references to hard-ons. He even covered degenerate redneck David Allen Coe. I met JD Patch after his show. He told me he grew up an army brat. He also said he came to his good ol’ boy sound by way of being a hip-hop producer. I know, I, too, was like, “the hell you say!” He was flipping through stacks of records one day and came across some country. The twang just lit him up. I would have guessed he’d been rocking country his whole life. 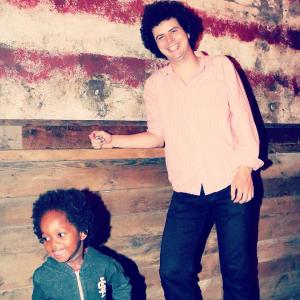 I’ve seen a few shows at Hometown BBQ now, and expect to see more. It has a most excellent country vibe by design. I’m not an advocate of slapping one’s own mama, but the food is such that, well, you might just slap yo’ mama on account of it’s so goddamn good! The joint doesn’t just get listed in top-tens of the city, but in the whole country, too. I’m also pleased by how diverse the patrons are. Everybody sits down to Hometown’s share tables. I like what good food does. I like what good music does. And whatever hard-edged concerns I have leftover, well, I like  what good booze does. 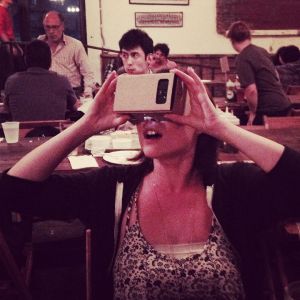 The Intrepid Photog marveling at Google Cardboard at Hometown BBQ

One thought on “Eat, Drink, and Be Married”