The first time I saw Mary-Elaine Jenkins walk on stage I almost balked. TRS was at Goodbye Blue Monday to see Matt Frye. His set had ended, and I was starving. I ordered a cheap beer and a cheap burger. Intrepid photog, Andreea, and I shot the shit with Mr. Frye and his wife Rivka. Andreea snapped my favorite pic of me. It is a testament to her ability that she makes me and a junk store/bar look like a couple of class acts. Believe me, GBM is no swanky joint, and I am not that well put together.

The intrepid photog leaves. Matt and Rivka depart. I am alone with the burger I neglected to eat while chatting. Just off stage I notice a young blonde woman and a guitar strapped to her back. Cute, attractive, young—have I said young, yet? A few of her girlfriends pony up to the bar. All young, all pretty. I’m getting a sorority-sister vibe. I try to finish my burger before her set begins. To brace myself before she goes on I Google her. Blues singer. And, yes, this inevitable thought runs through my mind, “So, this pretty little white girl is going to attempt the blues.” I decide to stay for the first song so that I might have a funny little anecdote to add to my dinner party repertoire.

The first note of the first song… There came from her a smoky voice, a depth that belied her winsome face. But for that youthful angelic visage I had to turn my gaze. I stared down at my shoes for the length of her set, and did what you’re supposed to do with music. I listened. Her original songs were good; studied, deeply felt, and honest. Mary-Elaine did not put on airs. She announced her next tune as a Tom Waits cover. I thought, “Ok, little girl, you’re good, but let’s not overstep.” She sang Chocolate Jesus, and she sang it true. She found the soulful rhythms, and she found the dry, yet tongue-in-cheek humor. She succeeded in the one aspect of Tom Waits covering that many other talented professional and wannabe musicians fail at. She made no more of the song than what it is. 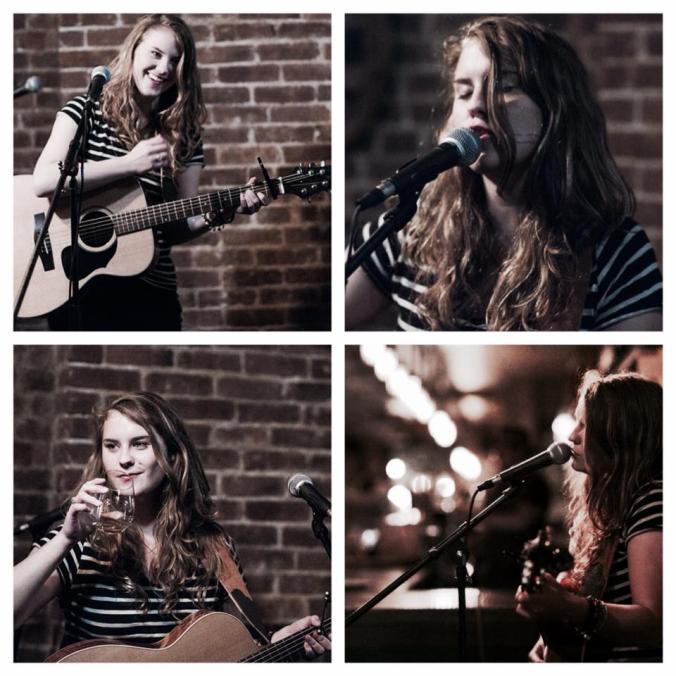 After her set, I gave her my card. After I left, I felt like a fool.

Mary-Elaine did not overcome the obstacle of being young, or being pretty to prove to me or whoever that she is a legit musician. She is talented. She is soulful as any, because any can be. “Pretty little white girl.” That was not the platform from which she ascended. That was me being an ass, me being a pretentious fuck who, if I’m being honest, thinks, though “believing” otherwise, that gender, race, and age cannot be transcended through music, or art. I am an ass, a pretentious fuck, which is what I would call any who told me I’m just some little white trash boy from the trailer park, and that my ability to speak well, or write well is but a cute trick of luck.

In some email exchanges Ms. Jenkins let me know she comes by her music, which she called spooky-sultry (which I like), from living in Savannah, Ga and hanging around the local guitar shop. That’ll do it. She told me some of her influences are Lucinda Williams, Bonnie Raitt, and Cat Power. I believe it.

After the first set, I knew I wanted to write about her (However, I didn’t think it’d turn into an apology), but I wanted to see a second show. I wanted to make sure I wasn’t wrong in thinking all the “more than a pretty young face” is worth the time it takes to write these posts (They take me longer than you‘d think. Because, I’m dumb, but a hard worker.). We saw her at Strong Place in Cobble Hill. I was nervous, nervous that Andreea would give me a queer look when the young, pretty singer walked in. I was, despite all the above well intentioned admittance and righteous self-deprecation, worried that I might have been entranced by beauty, and merely wishful in her merits as a songstress. Learning doesn’t always mean growing, folks. She came in with her guitar strapped to her back. Kindly, she said, hi, to myself and Andreea, and thanked us for coming. Some boys bellied up to the bar nearer to her. Andreea took her camera and flitted about the performer as she’s wont to do. I’m looking at the pretty, young girl thinking all the dumb thoughts from the night at GBM, not seeing her. She sings her song. I avert my eyes, gaze at my shoes, and listen. That’s her. And I am right about how good she is, and I am right about how dumb and unfair I can be, and I am grateful for the music and the lesson by the young woman and her you-done-me-wrong songs.

5 thoughts on “A Young Lady Sings The Blues”